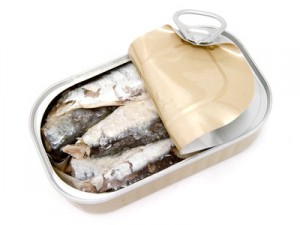 When my wife and I were first married, like many young couples we did not have a lot of money. Eating out was something we just did not do because we did not have the money.

One week, I was fortunate enough to get some extra hours and the Friday paycheck had a few more dollars. To celebrate our new found wealth I offered to bring dinner home and ask my wife what she would like. She quickly answered she that she wanted a hamburger from Dairy Queen. Without hesitation she clearly stated what she wanted.

Instead of simply acting on her request; I second guessed what she told me. I thought to myself,”Surely she would like something more exciting than a Dairy Queen hamburger.” So I decided to stop in the grocery store and find her something special. Wandering the aisle of the store, I spotted the perfect and exciting treat, canned Sardines and Pickled Polish Sausage! Standing in awe of my find I recalled how my buddies and I enjoyed Sardines and Pickled Polish Sausage with a few beers.  For some strange reason I thought it would be a special treat for my wife who was expecting our first child.

Proudly I walked in the door as my wife greeted me with a kiss. Confused she inquired, “where’s the hamburgers?”

I can tell you this was not my most successful sales pitch… she did not fall for it. After I received my well deserved “coaching session”.  My ever forgiving wife settled in beside me on the couch to watch a football game with me while I ate the Sardines and Pickled Polish Sausage. Boy, did I feel like a foolish jerk. She ask me for something simple and I did not listen, I second guessed and thought I knew better.

As leaders too often we think we know better than our teams when straight forward feedback is provided. We hear them tell us, but we second guess and think surely we know better than they do. Leadership Arrogance is something all leaders must  guard against. When we ask our teams for input we should not only hear… we must listen! Don’t give them Sardines and Pickled Sausage when they ask for Hamburgers.

The worst form of Leadership Arrogance is asking for input and then beating up on the poor souls who provide input we don’t want to hear. The courageous who give straight forward feedback are not stupid and will stop providing input if they are humiliated  and ridiculed.  People do not like to be played for fools, when the arrogant leader poses behind the mask of asking for “honest” input only to sell back their own agenda, the arrogant leader fools no one.

Unlike Stupid, You Can Fix Arrogance!

In the words of Forrest Gump, “That’s all I got to say about that”.

If you like this blog read more from Steven D Wood in his new book.