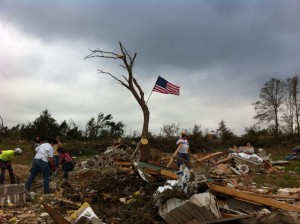 On May 20, 2013 a massive F5 tornado ripped through Moore, Oklahoma.  News stations broadcast reports during the storm that left us all feeling helpless as the tornado cut a wide path of destruction. Within minutes, first responders worked against the clock  to rescue hurt and trapped victims.

Behind the scenes hundreds of volunteer leaders across America were networking and mobilizing Disaster Relief Teams. Within hours of the disaster; relief team leaders were on the ground in Moore coordinating with local government, law enforcement and churches.

A few days after the tornado I was part of a Woodlands Church Disaster Relief Team working along side others volunteers and homeowners digging  through the ruins of their homes to find personal items and mementos. The experience was overwhelming both physically and emotionally.

Watching volunteer teams from all over the country working together seamlessly was amazing and powerful. In the disaster area working conditions were difficult, the challenge was huge and EMPOWERED leadership was evident. Among the debris and destruction I observed real life lessons and witness the power of Empowered Leadership.

Empowered by a Network of Leaders

Leaders across all organizations were prepared before the disaster and leveraged an established network of contacts. This established network of leaders facilitated quick and organized relief efforts. Committees did not have to meet for weeks, studies were not conducted, analyzed and debated before teams were deployed. Leaders were prepared to react before the disaster and leveraged their network to respond quickly. The result.. leaders were empowered and volunteers were in the disaster area helping people recover.

â€œWhen an Opportunity comes our way it is too late to prepareâ€ John Wooden.

Simultaneous with relief efforts, relationships were formed with the victims to help them restore their spirit and hope. Leaders went beyond moving debris; they stood along side the victims, embraced them, cried with them and prayed for restoration. Most of people did not ask for prayer; however, each one of was deeply moved when an empowered leader prayed with them. When leaders prayed with victims they begin the process of emotional and spiritual restoration.  Empowered leaders look beyond the rubble and take initiative to restore people emotionally and spiritually.

Empowered leaders restore the people before they rebuild the city.

Within hours of the tornado ripping a path through the city; church and communities leaders came together to establish a major Disaster Relief Center at Journey Church of Norman, Oklahoma. Leaders contacted other leaders, who contacted volunteers and  teams came together to begin the relief effort. All this occurred quickly without days of committee meetings or lengthy studies. Leaders were EMPOWERED to make decisions and help the victims. While in the eyes of some critics and bureaucrats some decisions were made too quick without “adequate data”. However; from the viewpoint of those who lost their homes in this disaster every decision was perfect and needed then and there.

If you need relief  from business, financial or personal disaster learn from the empowered disaster relief leaders and begin your recovery.

Click Here to View My Full Portfolio of Leadership Programs

If you like this blog read more from Steven D Wood in his new book. Now available online, or at your local Barnes & Noble or Borders. Also available for your Kindle or Nook.

Buy it From Amazon.com

Buy it From Barnes & Noble.com